Women’s football is gaining corporate support worldwide ahead of the FIFA Women’s World Cup in France this month. Several super brands are reaching out to the huge demographic that supports women’s football by placing their names in the conversation through engaging communication. And several have done it successfully.

Advertising around women’s football has been done by some brands as cause marketing. Commerzbank took the German women’s football team into the heart of the global conversation by countering the misogyny and prejudice they have faced over the years. It drew on the fact that the most successful European women’s national team is hardly known by Germans. In a one and a half minute spot, it calls out those who overlook them and succeeds in leaving a message that this team is one to watch at the 2019 FIFA Women’s World Cup.

Coca-Cola selected six leading women players from around the world and spotlighted their stories of triumph against the odds. One of the players is Nigeria striker and captain Desire Oparanozie speaks about how her journey at the World Cup will inspire young girls back home and around the world to play football and fulfil their dreams.

The BCC also launched a Change the Game campaign that draws on the strength of the best women footballers from around the world who work hard at making a name for themselves. The ad is supported by a soundtrack Remember the Name performed by rapper Ms Banks.

At home, Amstel Malta’s opportunity to activate its sponsorship of the Super Falcons has left me with mixed emotions. It opens with four Nollywood actresses/musicians seated at a bar without a tender and five Super Falcons players saunter into the bar in uncomfortable evening dresses. One of the players makes a double Thanos finger snap and they appear in more comfortable jerseys and boots. They are invited to have drinks in a hail of hi-fives full of cringe-worthy acting. A male movie star crashes the party and reveals he’s wearing the national team jersey. He’s invited to the party as they swig from Amstel Malta bottles. Pay off: All roads lead to France.

Firstly, the one-minute advert perpetuates the same prejudices that women’s sports have faced over the decades. In portraying the women footballers as unfashionable in evening dress, it says that there’s no place for sportswomen in the world of glamour and fashion. This sends a message to young girls that they cannot attain glamour through playing sport. That they cannot fit into society’s standards of beauty unless they are music and movie stars. In contrast, we know that some of the most glamorous women and models in the world are sports stars.

This ad also seems to riff its “We’ve got balls” title off the German women’s commercial launched earlier in May. The German women state that “we may not have balls but we know how to play them”. The Amstel Malta title is eerily similar.

The use of Amstel Malta’s array of female music and movie ambassadors confuses the message. Are you celebrating the women’s footballers or comparing them to the celebrities? This mixed message leaves the campaign all over the place. It would have just been better to tell simple stories of triumph as the Falcons head out to France, stories that can inspire young girls to pick up a football. We cannot get enough of inspirational stories on our TV and digital channels. Sport is about triumph against adversity. It is about these girls who were never expected to become much who are now the pillars of their families. They are riding the best cars and living in big homes because they chased their passion. And now they have an opportunity to once again represent their country on the global stage. Simple.

It is important that sponsors get their communication right. Despite the fact that Amstel Malta is one of the few local brands to put its weight behind the Super Falcons, this advert fails to chime with me and I daresay many discerning members of the public. It is at most poorly thought through and hurriedly shot.

One is left assaulted by the lack of creativity in the commercial. It lacks a proper message and misses the point, which is to inspire support for the Super Falcons, Nigeria’s most successful national football team, as they go to the World Cup in France. 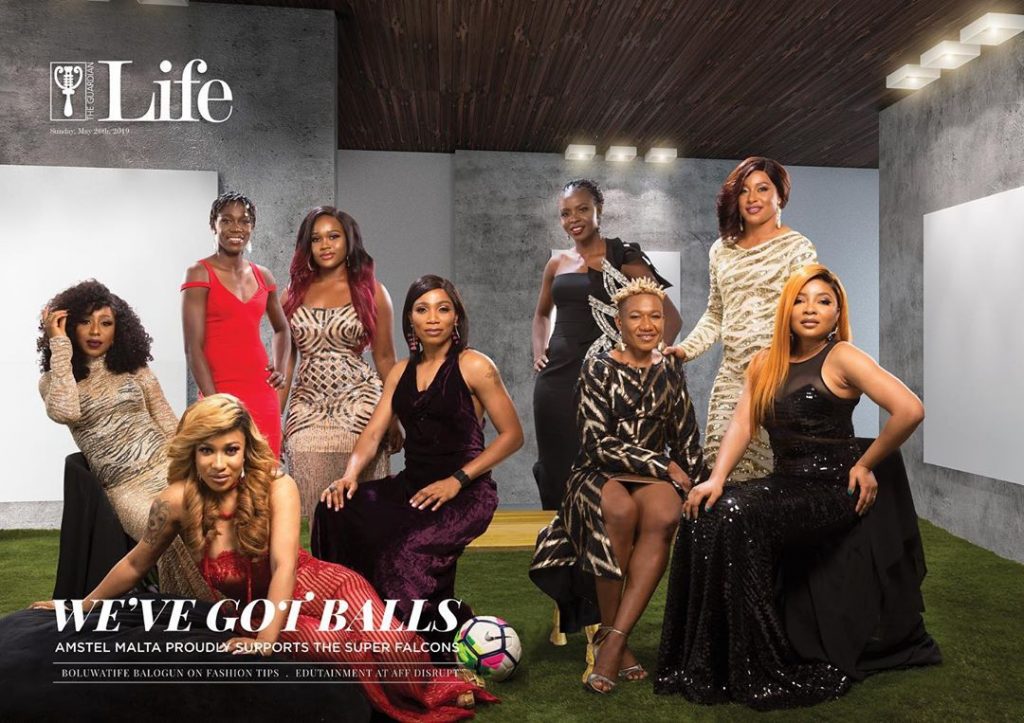 However, I praise Amstel Malta for taking over the cover of the Guardian Life magazine’s May 26 edition with the photo of the campaign. Even then, it does not allow the players of the Falcons to be the centre of attraction. It is like the brand cannot trust them enough to carry the campaign alone.

Still, even working with the Falcons shows a brand that is willing to activate its sponsorship across several platforms. We need more sponsors to explore the full spectrum of their rights. Brands are not doing enough with the sponsorship rights they possess.