It has taken six years after the launch of the Mikel Obi Foundation for footballer John Obi Mikel to finally find his passion and decide on the best way to give back to society.

The midfielder has announced a reality series titled “Nigeria’s Next Football Superstar” where he will pick nine talented footballers from auditions across the country to be signed on to academies in England and a shot at professionalism.

First launched in 2012, Mikel said at the time that he wanted to work with the homeless and provide them shelter. But nothing much was heard about the foundation and its activities afterwards.

Six years later, now a 31-year-old with kids and a family, the former Chelsea midfielder has decided that the homeless are not what he wants to work but with children – teaching them how to play and excel in football and hopefully going on to have successful professional careers just like himself.

Fair enough, football is what Mikel has excelled at and it is what has made him what he is today.

Arguably the best Nigerian player of his generation, Mikel has won several of the biggest titles in world football over a career that has spanned almost two decades. Premier League and FA Cup titles, as well as Champions League and Europa League trophies with Chelsea, have been matched with an Africa Cup of Nations title as well as an Olympic Bronze medal with Nigeria.

As he reaches the twilight of his career, the Super Eagles captain is emboldened to begin making moves that will preserve his legacy and ensure that he remains in the limelight even after the game.

For such an accomplished footballer who played for 10 years at Chelsea, it is strange that Mikel’s marketability has not been highly maximized. With a change of management has come a new zest for moving out of his comfort zone and exploring the opportunities in the brand marketplace. This led to his recent partnership with broadcaster Kwese ahead of the 2018 World Cup, one of the key reasons that the foundation has come back to prominence.

At the announcement of the partnership with Kwese in June, Mikel said that the “deal will further allow us to widen our scope as we seek to alleviate poverty by empowering young Africans through sports and specifically nurturing talents in football. The Foundation will help pull these kids out of poverty and take them to stardom in their chosen sports.”

In following up, Mikel kicked off with a football clinic with 150 children from the Little Tigers Football Club, the F8Ballers Africa and other academies in Lekki on Sunday, November 25. While the collection all seemed posh and comfortable kids, he said the main focus is to go to the streets eventually.

“Nigeria is where it all started for me,” he said. “This is the right time to do this for kids and also with the people I have now who are supporting me.”

Backed by Kwese’s pan-African reach, Mikel will create a reality show called “Nigeria’s Next Superstar” that will see nine young footballers from Nigeria receive two weeks training at the academies of English Premier League clubs after which they will be able to sign youth team contracts. 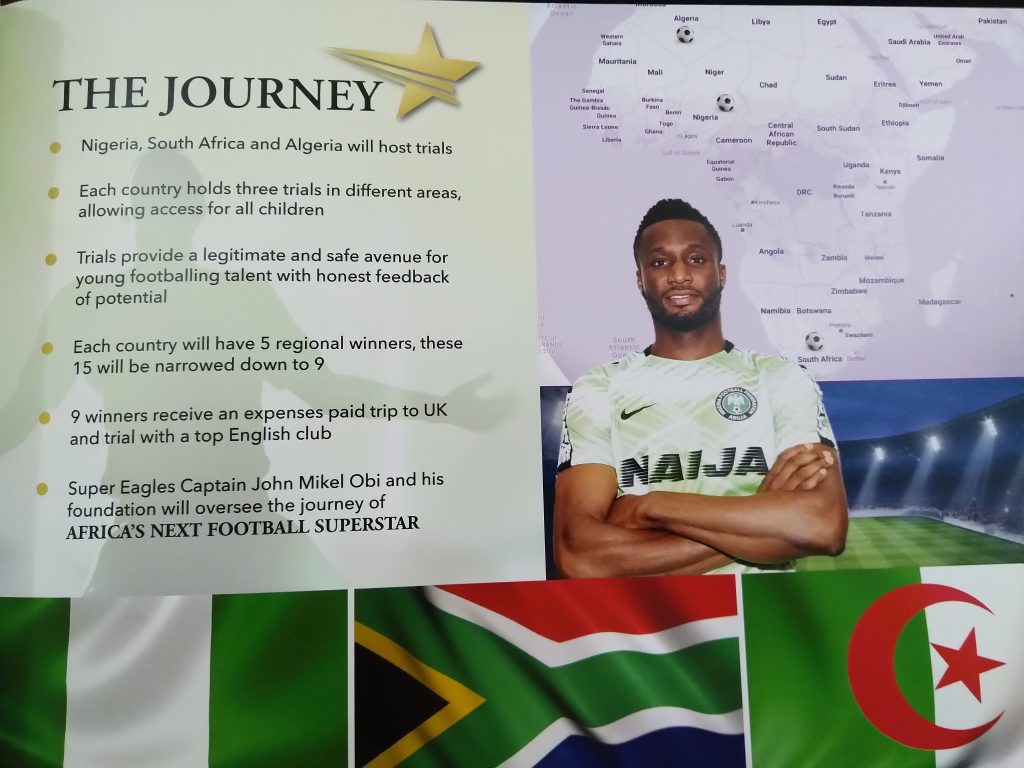 The show will begin with trials in Abuja in March 2019, Port Harcourt March 2019 and Lagos May 2019. They will be broadcast by Kwese.

It has taken six years to find his true passion as well as the right management to help him start something off the pitch. For Mikel, it’s time to make a big splash.